Lopmon is a Rookie Level Animal Digimon, and the "twin sibling" of Terriermon, despite having different colors and more horns.

Lopmon resembles a rabbit, while Lopmon's "twin sibling" Terriermon is considered a lop-eared dog. While Terriermon is an over-confident sort and tends to make sarcastic remarks, Lopmon is shy and polite.

Lopmon is the Digimon partner of Suzie Wong, Henry Wong's little sister. However, Lopmon was also Antylamon of the Devas, and guardian of the South Gate to Zhuqiaomon's palace. When Suzie first meets Antylamon she is treated as a small annoyance (albeit with kindness and patience), but after spending some time together, they develop a special bond. When Antylamon's fellow deva, Makuramon, appears and tried to harm Suzie, Antylamon drives him away. As punishment, Zhuqiaomon reverts Antylamon to Lopmon for protecting a human, and Lopmon became a partner to Suzie.

When the Tamers confronted Zhuqiaomon, Lopmon pleaded with Zhuqiaomon not to kill them. Regardless, he unleashed a blast of flame on Lopmon although in the end she was saved by WarGrowlmon. Lopmon, like the other Tamer Digimon, went to the Real World. When the D-Reaper appeared, Lopmon regained the ability to digivolve to Antylamon to help out. Lopmon's only appearance during the final battle was when Kazu, Kenta, Guardromon, MarineAngemon and herself entered the D-Reaper to help. They arrived in one of MarineAngemon's bubbles just in time to rescue the recently de-digivolved Tamers and Digimon. Afterwards Lopmon was forced to return to the Digital World with the rest of the Tamers Digimon. In Dimensions, she returns to her partner and continues to be a valuable member of the team. She and Suzie eventually gain the ability to Biomerge into Cherubimon. 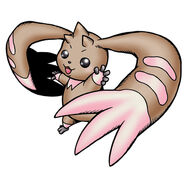 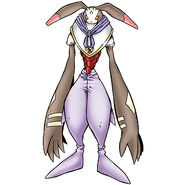 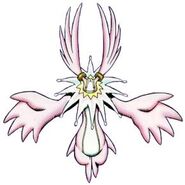 Cherubimon
Add a photo to this gallery
Retrieved from "https://dimensions.fandom.com/wiki/Lopmon?oldid=5648"
Community content is available under CC-BY-SA unless otherwise noted.