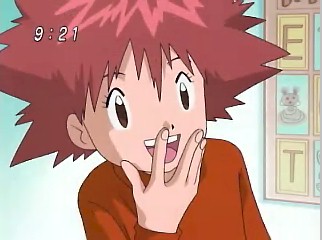 The older sister of the Digidestined Davis Motomiya (and former fan-girl of Matt Ishida and later has a crush on Joe's older brother), Jun is described as cheerful and slightly ditzy. Her brother thinks she's annoying

and they argue quite a bit, but they are still close.

During the show, she constantly tried to gain Matt's attention. One time, when Matt was going to tell the Motomiyas that Davis was going to be gone for a little while (covering for a prolonged trip to the Digital World), Jun said that she knew that he was lying and blackmailed him into going on a date. She also wanted to go camping with him, but he told her to close her eyes and left her behind; she later tracked him down at the campground itself. In Book Seven, Jun finally followed in her younger brother's footsteps by gaining a partner, Datamon, and becoming a tamer.

Retrieved from "https://dimensions.fandom.com/wiki/Jun_Motomiya?oldid=5653"
Community content is available under CC-BY-SA unless otherwise noted.